Join your favorite characters from the Trump Administration in determining what felony was committed where in this thrilling whodunnit! Available to order from the OrangeStripeStore on Etsy.

Take on the role of 1 of 12 different Trump cabinet or family members, then set off to dig up dirt on the mystery player in order to secure your place in power.

Was it Ivanka Trump laundering money at a foreign construction project in Panama or Azerbaijan? Or was it Michael Flynn who was an “unregistered agent of a foreign entity” while consulting for Turkey when Trump appointed him National Security Advisor? (Hint: it’s both!)

Your journey to get leverage over your peers will take you across the globe – very quickly, actually – since you’ll be flying in absurdly expensive private jets funded by taxpayers despite the fact that cabinet members are only supposed to fly coach on commercial airlines. Perhaps you’ll find the dirt is on Tom Price who spent over $1M on just 24 trips. Or Steven Mnuchin who spent $800K for 7 trips. Hurray for unaccountability! 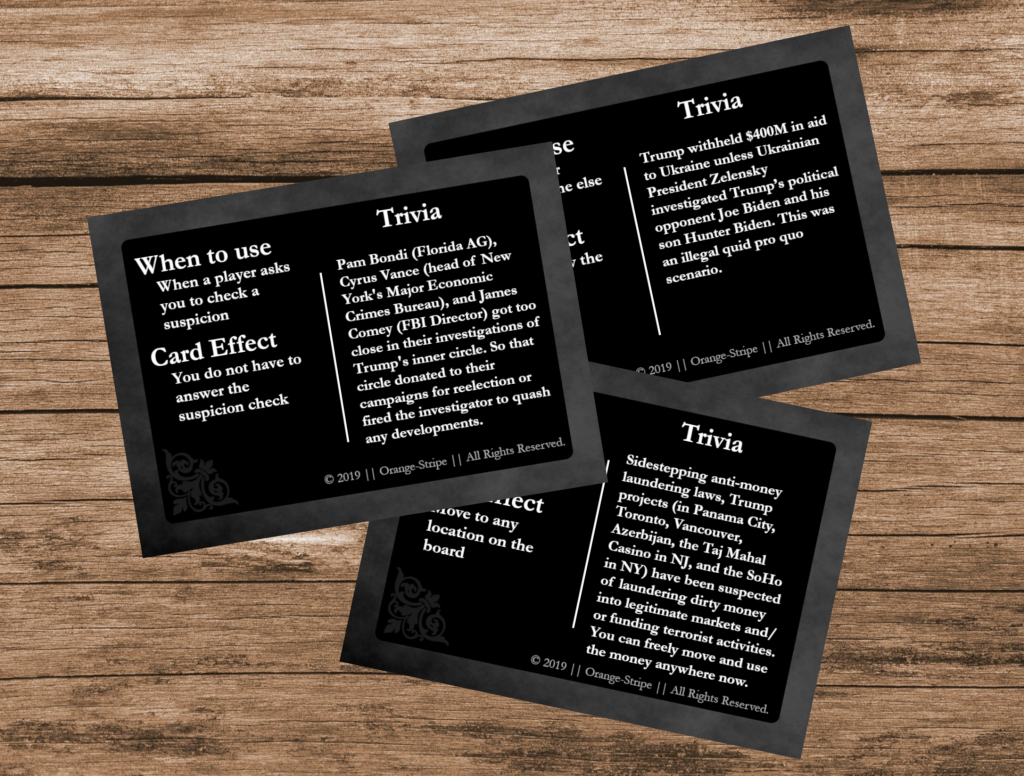 If you find yourself lost between this administration’s deluge of ethical scandals we’ve created a brief summary of highlights to help you get acquainted with them, available here: https://www.dropbox.com/sh/1qymnepj9uvr17p/AAC2U8OR8_o0S9boGvqJCQyMa?dl=0

Scott Pruitt, for example, spent $43K on a soundproof room which is $38K more than he’s allowed to spend before notifying Congress. He said he needed a soundproof SCIF (Sensitive Compartmented Information Facility), but it was later determined that the room he built didn’t meet SCIF requirements. Furthermore, the EPA already had a SCIF in the building. Thus it was likely Pruitt’s attempt to build a recording studio next to his office to help launch his R&B career, recording such singles as “Global Warming Please Thaw My Heart” and “Your Love’s Got Me Dizzy Like L.A. Smog”.

Steven Mnuchin, meanwhile, produced the movies “Aliens vs. Predator: Requiem” and “Dragonball: Evolution” which were decried by the UN for instigating massive suffering worldwide. He also lied under oath, which is kind of back in vogue now that Scott Pruitt, Tom Price, Paul Manafort, and Michael Flynn have all done it.

It also covers the extensive white collar crime Trump has engaged in, such as doing business with the Mafia-associated LiButti in New Jersey, doing business with the Mammadov family in Azerbaijan (associated with the terrorist organization known as the Iranian Revolutionary Guard Corps), and dealing with many other organized crime members in Panama City (of whom several paid for their condos in all-cash deals). Trump, it seems, doesn’t discriminate where he gets his money from.

Okay, except for those times he discriminated where he got is money from – but it wasn’t from kidnappers, money launderers, or people linked with organized crime. He discriminated against doing business with black people.

He has been fined for refusing to rent to or negotiate deals with people of color, and he’s misrepresented what apartments were available to black tenants. But besides black people, Trump probably doesn’t care where his money comes from. Even if it’s not given to him. Such as the liens ranging between $75K to at least $1M from painters, carpenters, dishwashers, waiters, and lawyers who have not been paid for work performed. There were 252 subcontractors, for example, that weren’t paid for their time worked on the Taj Mahal property in Atlantic City.

There are also the undocumented Polish immigrants who worked on Trump Tower that at times were paid late, or paid less than they were supposed to, or not paid at all. He was happy to keep their money. Some might criticize him as hating immigrants, but that’s hardly the case. How could he hate a group of underpaid workers who worked 12 hours a day, 7 days a week, and slept at the construction site. If anything Trump loves them (and how much easier they are to exploit than regular employees).

Jared Kushner’s fraught past also appears due to his business that’s been losing money on their New York property. With a $1.2B loan payment that was due on the horizon, he’d been struggling to find banks willing to extend him credit in the same way hobos struggle to find people willing to throw money into their dumpster fires. While serving in a public role, Kushner should not be running or helping his business, in order to avoid a conflict of interest. That didn’t stop him, however, from meeting with executives from Citi Group and Apollo Global Management in the White House which just happened to coincide with his business receiving exorbitant loan approvals shortly after.  Additionally, after the National Security Council goes to bed, Kushner has been secretly holding meetings with foreign officials by letting them climb through his bedroom window and looking for potential opportunities for him to receive funding. Okay, not exactly through his bedroom window but he’s still gone around the NSC to set up contacts with foreign officials likely to get loans. We expect The National Security Council to ground Kushner for the actions and take away his Xbox privileges for the week.

Then there’s Ben. Dr. Ben Carson who had purchased a $31K dining set for his office when the limit for this type of spending is only $5K. When news broke, he said he had no knowledge of this. But then emails emerged that he not only knew about it, he had handpicked the dining set. Since the emails are not in the Bible it’s possible that we should interpret them metaphorically, and only leave literal text interpretations to Bible passages like Carson has done. But in Carson’s defense, if he didn’t violate these rules the money may have gone to help students attending public schools. There they would have learned dangerous ideas such as the theory of evolution which Carson literally believes was encouraged by Satan. Luckily, he had his “Gifted Hands” to do God’s work. Sometimes that meant sticking his fingers into people’s brains, other times that meant having sticky fingers with the government’s checkbook.

If you’re interested in more updates about this project including further expansions or receiving a physical copy, sign up for alerts below! We won’t spam you.

Orange Stripe is a humor website and the views do not reflect those of any other organization.

Craft Time! Recreate the Wells Fargo fraud with your kids in origami