How do you begin to describe a man like Christie? Most people will say he’s an attentive lover but rarely do we talk about him outside of the two weeks we spent with him in Cabo.

Enter Chris Christie the Hero. Before the fame of his public career Christie served as a pilot for Rebel Alliance at Echo Base. Many will remember this as the location of the famous Battle of Hoth depicted in The Empire Strikes Back. Here’s an old photo of Christie that’s probably maybe him. 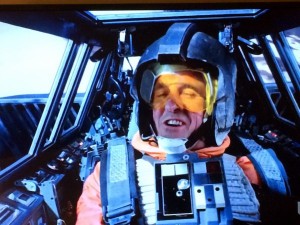 Regardless of how uncomfortably cold it was, Christie repeatedly asked to live in the most challenging environments there were. On Hoth this often resulted with him sleeping on the bunks most prone to having a wampa ice creature walk through, which he seemed to take a keen interest in. As one former officer recalled, “I’ll never forget when I was walking through the hangar one night and heard muffled activity coming from a snowspeeder. The windows were all fogged up but when I got closer I saw Chris lying next to a wampa. He yelled at me to get away because the wampas were super dangerous or something. I don’t doubt it. It looked like it had torn off all of Christie’s clothes and the two were caressing each other pretty aggressively.”

That’s just the way he was, always throwing himself in harm’s way. If ever there was a wampa sighting Chris would volunteer to take care of it. “At times he’d even go out in the middle of the night by himself,” noted a former squad mate, “and when we asked him what he was doing, he sort of stammered and said that he was making sure there were no wampas around. When we asked why he took a picnic basket with him he said that maybe they had some food allergies so the picnic basket could help keep them away. When we asked why he was wearing cologne he said it could, you know, interfere with the wampas’ sense of smell and shoo them off. When we asked why he took his Barry Manilow CDs with him, he told us to shut up and go to bed.”

It was the sacrifices he made like this which showed he always had his squad’s back.

Another time he picked up extra shifts for the Security Office when a mother wampa and her young were found on base. Security needed additional staff to monitor whether the wampas had been successfully evicted or if they would try to come back. Hour after hour Christie gazed out of the surveillance room window, across the frozen expanse of Hoth, wearing a forlorn look on his face. The radar he was supposed to be attending beeped softly on the other side of the room like a quiet heartbeat; there were no wampas nearby, and the radar sounded distant like Christie’s chances of becoming president would always be.

But, as we know now, this lull would not last forever. The Empire invaded and Christie bravely took to the skies to fend off the approaching AT-ATs. For this we owe him our nation’s highest honor, a firm handshake.

That is the duality of Chris Christie: not only an incredible lover but a hero who’s able to persevere under the harshest circumstances. Though his snowspeeder was blown up Christie survived the Battle of Hoth, as he would the destruction of the second Death Star and perhaps his currently imploding political career. But to this day, if you catch him at just the right moment, you can see him gazing into the distance, at something no one else can see, at the lonely glaciers of Hoth, waiting for the radar to beep out of step, and looking for the warmth of a tender wampa to keep close to in the frigid night.

Groups liberals can blame for the election