During the holy week of the Democratic National Convention, protesters and Sanders supporters gathered in Philadelphia to demand the Chosen One of the Democratic Party be arrested and tried for blasphemy. Even so much as a mention about Hillary of Chicago resulted in curses and jeers from the maddening crowd.

When asked if she believed herself to be the party’s nominee, Clinton, resigned to her fate, responded “Thou sayest I am. To this end was I born, and for this cause came I into the world.” At these words, Sanders supporters tore their robes crying, “What need have we for any further witnesses! See how she blasphemes herself!” and then began doing the Bernie Lean dance move, all in accordance with the Talmud.

Trying to deescalate the situation, party leaders suggested pardoning Clinton as was custom during the DNC but this was swiftly met with cheering for the murderer, insurrectionist, and all around d-bag Barabbas to be released. 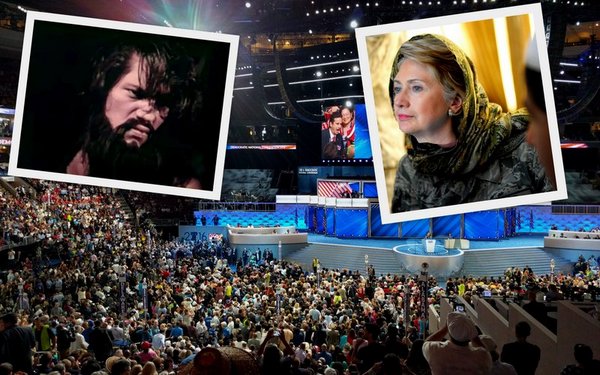