On December 18th Orange Stripe hosted its first annual Hero Awards ceremony and presented this year’s prestigious Person of the Year Award to Justin Fram, a legal aide who in the past 12 years has never worn cologne in the office.

Fram’s zeal for cologne prohibition started at an early age. In the first grade, while all the other boys were off exploding cans of AXE Body Spray in gym lockers, Fram begged his father to allow him to join the local chapter of the Young Men’s Anti-Cologne Association.

Upon joining Fram was assigned flyer duty which primarily involved inviting strangers to exciting events such as weekly budget reviews, and the lecture series in the public library’s conference room.

However, he wasn’t satisfied with the promotion methods his team used. In those days, people on flyer duty would lurk on street corners waiting for pedestrians to walk by and then chase them down and stuff pamphlets into their pockets and purses. A tradition continued today only by people outside of the metro. Fram experimented with alternate distribution ideas. He decided to save his energy by setting up a table, and giving out flyers only to those people who had stopped by and appeared interested in the community’s events. At that point he would ask them if they had any friends interested in attending as well. If so, he would give them additional flyers to pass on. If not, he would thank them for their time.

It was these smarts that got him elected by his peers to the Office of Print and Radio Propaganda. His duties included writing diatribes on the social ills of cologne, and over the next few years his work developed into a routine. Before each day he would take his coffee into the library and spend a half hour digging through books trying to expand his knowledge and possibly find material worth sharing. It’s here he discovered the autobiography of Melvin Gelato, the creator of the scarf who had hoped to hide all cologne smells by covering a person’s nose and preventing others from smells emanating from one’s own neck.

Gelato was a Polish refugee in the late eighteenth century who fled to the Kingdom of Italy after continued Russian aggression back home. As a young man he took up tailoring to support his parents until Napoleon conquered Italy, and Gelato was absorbed into the army by France’s mandatory conscription. It was here Gelato fought firsthand the heinous smells used by Russian forces during the war. Russian war parties would drench themselves in oils and colognes to wreak immense damage to land they retreated from. In the event their skirmishes were unsuccessful and they were forced to retreat, the lingering smell of their cologne would stain the ground, diminishing the tactical and economic advantages an enemy would gain from it. Literally every Russian engagement was guaranteed to be devastating.

After Gelato’s first tour, he was selected to work in the French Corps of Engineers and Knitters. Here he worked on a highly clandestine research project developing scarves to protect corn and other vegetation from cologne-spoiling. An early blueprint for scarves has been reproduced below. 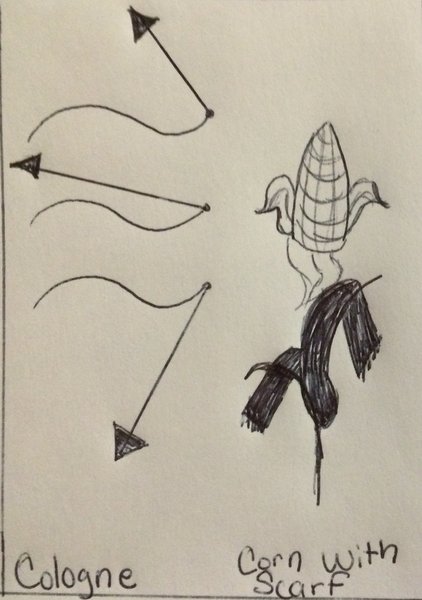 After a few more tweaks the scarves became human grade in 1810 and were both issued to soldiers and released to the public to subsidize the war effort. They became a source of great pride to wear publicly and to this day scarves remain one of the most easily recognizable political symbols.

Gelato’s writing hit home to Fram. As he grew older, Fram would open and close each day by lying in bed reading Gelato’s essays about the history and nature of cologne.

The modern name for Eau de Cologne got its name from Cologne, Germany. The reason it is pronounced like “colon”, however, is because it smells like someone’s colon just evacuated a stool. Over the ages it’s had many different uses and they haven’t always been for evil, Gelato notes. During the Middle Ages cologne was believed to ward off the Bubonic Plague. It didn’t but it’s a good thing we don’t believe anything crazy like that anymore. Now we know it shuts down every woman’s prefrontal cortex and makes them super aroused by any man wearing it, thanks to AXE commercials, and TAG and Giorgio Armani commercials, and Polo, Lacoste, and Hugo Boss commercials….

Fram went on to champion efforts to ban famous colognes and perfumes, most notably Chanel No. 5. The fragrance was beloved by Chanel and her customers because it was designed to smell like soap, perfect for women on the go who don’t have time to shower. But after many users were unable to apply less than quart of it whenever they went out, both the fragrance and customers were known to erupt into flames at inopportune times.

These victories bring immense pride to Fram. But during our conversation before the Hero Awards ceremony, he lamented briefly on how much work there is left to do. A worldwide ban on cologne may not happen in his lifetime and this occupies his thoughts quite often, he confides.

“Gelato would mention this one idea in his autobiography that there was a sandwich-like structure to his life. On one hand was his past in Poland which was great but taken away from him by cologne and the Russians that fought with it. On the other hand there’s this brilliant future where cologne can be eradicated from the planet. But right then for him – in his perpetual present – he was stuck in this existential state where cologne was starving and killing people and he couldn’t find a way into the future or back to the past where there was no cologne. He’s stuck in this middle and as each second moves by, that sandwich of good on both sides and evil in the middle moves with him.”

I had kind of fallen asleep while Fram was talking so I thought he was sarcastically talking about commercials for luxury items, which essentially tell me my current life is incomplete until I purchased whatever they are selling. Like a new car or house which would elevate my current life to its next stage, from the insufficient middle to the better future. Or anti-aging cream which would help me return to my lost, idyllic past.

But he wasn’t sarcastically telling me the “present is insufficient” and selling me some elusive virtue. He was serious. Or rather, he was saying what Gelato seriously believed and that he, Fram, wasn’t sure if he agreed with it.

“Like, I struggle with the idea that there are these elusive virtues that if you get, then you’re a true person or a true man. That you’re socially validated. It’s just social norm after social norm. They seem perpetually out of your reach or constantly changing so you always feel insufficient. Or you need to buy something to get them back.”

I fell asleep again and thought Fram was talking about the premise to every issue of Esquire Magazine. Luckily the show was starting soon so he had to leave for his dressing room.

While I don’t understand a word he says about philosophy, I and all of my colleagues at Orange Stripe are able to bask in the work Fram has done curbing the spread of cologne. He’s a hero and a prime example of how you can enjoy your work week. For the bequeathing of his hero award plate, who better to give our hero his hero award, than his hero’s grandson. Below: Fram (left) accepts the Person of the Year award from Gelato’s grandson and President of the Gelato Foundation, Oscar Gelato (right). 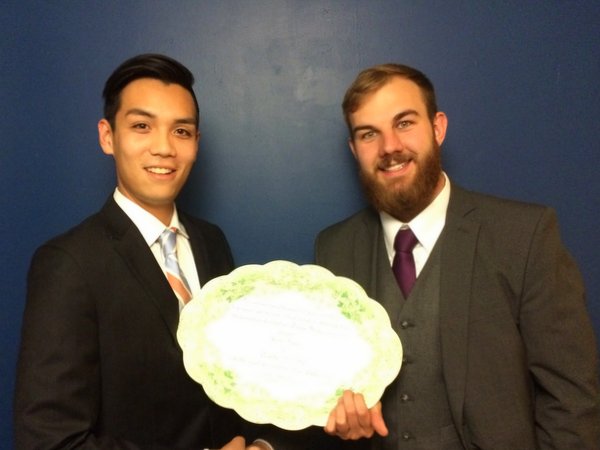