Besides Star Wars: The Force Awakens, the big treat for moviegoers this Christmas is the new movie Santa Claus Conquers ISIS. In a strange, but ultimately bold move, Disney let director Kathryn Bigelow and screenwriter Mark Boal, the Academy Award-winning team best known for films like The Hurt Locker and Zero Dark Thirty, take the reins of their much beloved Santa Clause franchise.

Jolly ol’ Saint Nick played by Jason Statham, replacing Tim Allen, is preparing for Christmas. The denizens of the North Pole are all singing a happy, well-choreographed number called “Christmas, We Can’t Wait” but Santa finds he can’t be entertained the way he used to be because the pressure of the season is getting to him. He wishes to be back on the frontlines, and the film ingeniously cuts back to Santa during his time on a gunboat in Vietnam, an homage to Francis Ford Coppola’s Apocalypse Now. As we see Santa gun down a Vietnamese village, the film cuts back to Santa, drinking alone in a bar in the North Pole. Maya (Jessica Chastain, returning as her character from Zero Dark Thirty) is trying to recruit Santa for a mission that is of the utmost importance to the security of the United States: defeating the terrorist group ISIS. With his magical powers, knack for making toys, and flying into dangerous regions unscathed, Kris Kringle is the CIA’s last hope.

Santa flies his magic sleigh to Langley to meet CIA director John Brennan (William Hurt), where Brennan briefs him on the atrocities committed by ISIS in a song-and-dance number entitled “A Very Unjolly Christmas.” Brennan tells Santa that CIA’s plan is to drop toys that are actually high-tech military-grade weapons to Syrian children in order to help them in the fight against the nefarious terrorist organization. Santa, having a moral dilemma as to whether or not dropping violent weapons intended for children is really appropriate in such a joyous and happy season, goes back to the North Pole to consult with his wife, Mrs. Claus (Sofia Vergara). After a night of passionate lovemaking (in one of the film’s most eloquent and artful sequences), Mrs. Claus sympathizes with Santa, telling him that she agrees that he should be conflicted. But then, holding Santa’s head in her hands, she implores her husband to “kill those sons of bitches.” Santa, asking the elves to take over toy production until he returns, recruits two of his best elves, Jingle (Terry Crews) and Jangle (Dolph Lundgren), to fly with him to Syria in order to execute the CIA’s plan and to decimate ISIS once and for all.

But when Santa’s sleigh is shot down over Syria, Santa, Jingle, Jangle and the reindeer are taken hostage and come face-to-face with ISIS’s leader Abu Bakr Al-Baghdadi, played by Robert De Niro in what turns out to be one of the best and most haunting depictions of a villain in recent cinematic history, a performance that rivals Heath Ledger’s Joker in The Dark Knight, Javier Bardem in No Country for Old Men, and Christoph Waltz in Inglourious Basterds. But with Christmas Eve fast approaching, how will Santa ever get back to the North Pole in time for Christmas!?!?

Fans of action, as well as fans of family-friendly Christmas fare will be delighted as they watch the Santa they know and love shoot machine guns and fire missiles at the world’s most notorious terrorist group. Equal parts Rambo and Rankin-Bass, this movie is a delight for all ages and audiences! 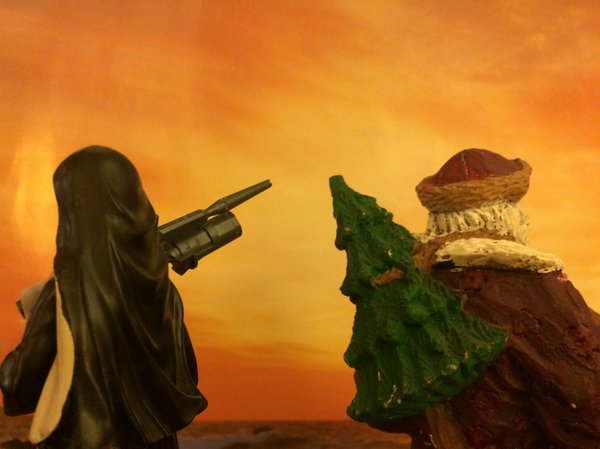 When my girlfriend's bathroom fan broke, she did the best thing ever