Roommate bails to live with Spider-Man

After 8 months of living together, local tenant Gary Dobbs learned his roommate is bailing to go live with Spider-Man. The news hit last Friday when roommate Jeff left a post-it note on the front door explaining he was moving out next week, misspelling both “moveing” and “weak”. It came as a total shock to Dobbs who wondered why anyone would want to live with Spider-Man. “All Spider-Man does is come over when he’s drunk and practice Taekwon-Do against the sofa,” said Dobbs. “And then he falls asleep in the kitchen.”

The biggest shock, however, was that Jeff would want to move out after Gary was not only a great roommate, but such a close friend as well. Reflecting on all the fun times they had together, Gary remembered, “if Jeff was doing work, I’d always ask, ‘Hey, is my music too loud?’ Or when he couldn’t find a pencil to write something down with, I’d tell him ‘It’s okay, you’re still an amazing human being.'” Gary broke off then, looking over the floor as if it held the words that could explain exactly how he was feeling. “It seems that meant nothing to him,” he said.

In retrospect Gary can see that it wasn’t about him at all, Jeff and Spider-Man simply had a stronger relationship. “They have a lot of things in common. Jeff’s favorite thing to do was to vomit in my backpack. Then deny he vomited in my backpack. And say he had no idea how the vomit got in there but he definitely wasn’t the person who woke me up last night and who I watched vomit in my backpack. Spider-Man can just relate to that more than I ever could. He also enjoyed blaming me when he would do Taekwon-Do against the surround sound speakers and smash them into the coffee table.” 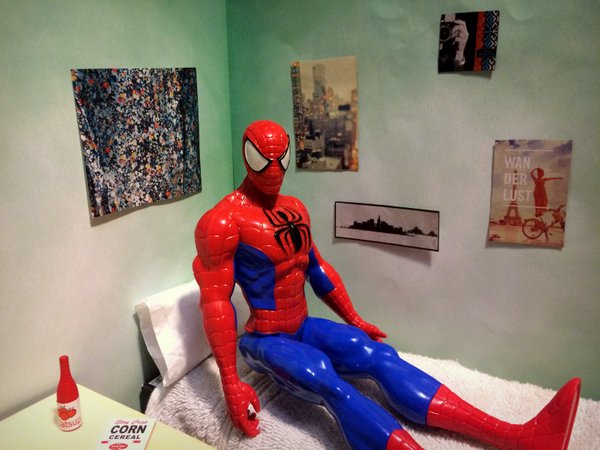