When several major news outlets called a loss for Westermeyer in the 6th grade, where he spent the most time and resources campaigning, no amount of pre-algebra could justify a win against Dobbs. Shortly before bedtime, the Westermeyer campaign conceded over Twitter. 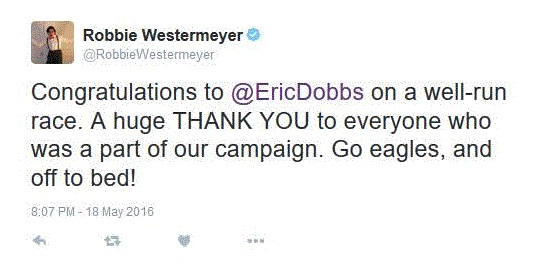 Westermeyer, whose platform pushed school lunch reform and promised to commute sentences for students barred from checking out library books, reached out to constituents over social media, appeared twice weekly on the morning announcements, and made campaign stops at 6th and 7th grade lunches. “We were trying to tap into the conscientious and politically engaged voter,” told Westermeyer to Pinebrook Times editor Sara Blake in an exclusive interview.

“It was hard to lose to someone who didn’t seem to have any policies at all,” said Westermeyer. “Based on our research, he only made a few posters and was really only asking his friends to tell people to vote for him.”

At the beginning of the election, Dobbs ran an ad campaign, urging voters to “vote for someone they actually liked,” and reminding them that “’Dobbs’ is, like, 5 letters.”

“I don’t think we ever really recovered from that,” reported Westermeyer.

“This is a good opportunity for me to focus on my family and playing Overwatch,” said Westermeyer. “We’re down but not out. We’ll spend some time fundraising and be up to run again in a few years. Dad says poster board is expensive.”

Westermeyer has already reached out to Dobbs over WhatsApp to congratulate him and to set up a meeting to discuss more specific language on policies in the coming year. Sources in both campaigns confirm that Westermeyer’s mom will drop him off at the president-elect’s on Wednesday so long as Dobbs’ mom can bring him home by dinnertime.