In times of distress, crowds form near 10 Downing Street in downtown London, the official residence of the British Prime Minister and the headquarters of Her Majesty’s Government.   But what are they waiting for? Who are they here to see?

Perhaps they wait for a Prime Minister during these challenging times, where a transitioning government will usher out one PM and bring in a new one? Or perhaps a glimpse of Her Majesty, the Queen? Or maybe some kind of embodiment of British culture such as the Beatles flying in on a yellow submarine? Or one of those guards in the red uniforms and tall, black fuzzy hats installing a new red phone box? Or maybe even Sherlock Holmes walking arm-in-arm with Robin Hood, King Arthur, James Bond and a yeomen warder while drinking tea and munching on crumpets?

But, when you talk to the common people, something becomes more apparent. They’re waiting for someone else, someone in whom they place their faith more so than in politicians, regents or delightfully-British tropes.

“It’s been a couple of damn weeks since that Brexit vote, and ever since then, I’ve been hoping to catch a glimpse of a blue police box materializing suddenly, and a disheveled British man and some good-looking young woman walking out urgently to fix this sort of thing,” Nigel Johnson, a 46-year-old London native reports. “I forget if this time around it’ll be the bloke with the big scarf, or that lad with the posh suit and the sideburns, or that young chap who don’t got any damn eyebrows! Hell, he might even look like Peter Capaldi at this point! But whoever that chap is, I know he’s got a plan to fix this whole Brexit thing.”

After the United Kingdom stunned the world by voting to leave the European Union on June 23rd, there has been political chaos throughout the country. The former Prime Minister, David Cameron, resigned to be replaced by current PM Theresa May. Other party and political leaders on both sides of the issue find themselves similarly resigning or in the midst of unprecedented controversy or criticism. The “Leave the EU” campaign has done little to nothing to calm the concerns of the British electorate. Scholars and pundits both agree that Brexit represents the biggest crisis to hit the British people since the Dalek invasions of 1964, 1972, 1930, 1984, 2005, 1941, 2005 again, 1452, 3423 and 67 BC, respectively.

But Sarah Mackenzie-Yates, a graduate student at the University of Nottingham, keeps an overnight vigil, hoping to hear that famous cyclic wheezing, groaning noise and a blue police box to arrive to quell everybody’s worries.

“Look, some people might put their faith in governments, or in the church, or in the people, or even a dark-haired boy with glasses with a lightning-bolt scar and his friends. But I think that it’s that blue police box that we need right now to fix this entire mess. It’s always been there before when we’ve needed it, and now, we need it more than ever to prevent the giant cataclysm Britain appears to be on the precipice of.”

But for now, Nigel, Sarah, and all the other onlookers will have to be patient, as there is no sign of resolution in any form. 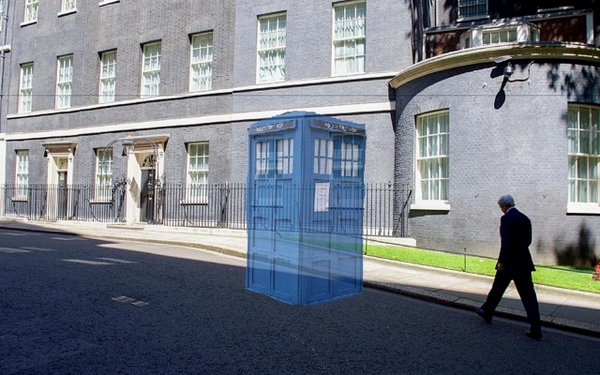