Could this Potato be 2016’s biggest pop star?

If you’ve tuned into the radio at all this year you’ve likely heard the break out hit of this 3 month old potato. An eclectic fusion of EDM, pop, and hip hop, Frankie Potato’s “The Tater Trot” rose to the topsoil of Billboard’s Hot 100 list this past week at the number 5 spot. And his rise to super stardom shows no signs of stopping soon.

Potato is one of the most highly requested artists to collaborate with by some of the entertainment industry’s most influential people. His past album has been produced alongside the legendary Rick Rubin, while Ice Cube (behind Eazy E’s album Eazy-Duz-It) penned the lyrics.  Moreover, the iconic Reggie Griffin from Sugar Hill Records who worked on Duke Bootee’s famous song “The Message” (which was later released by Grandmaster Flash & the Furious Five ((even though the group didn’t really appear on it…)) ) composed the synthesizers for Potato’s first effort. But most importantly, at the end of Justin Timberlake’s 20/20 Experience World Tour, Marty Kudelka (who’s previously worked with Mariah Carey, Jennifer Lopez, and Janet Jackson) came on board to choreograph the hottest dance numbers for Potato’s summer shows.

Rumors that Ice Cube and Rubin have been trying to get T-Payne’s proprietary auto-tuning technology to be apart of Frankie Potato’s act have recently been confirmed, as well as news that Kara DioGuardi (who wrote the song “Autobiography” for the Ashlee Simpson,) will be lending her windpipe, tongue, and all derivative sounds from them for the upcoming album.

But putting a team like this together requires immense coordination and friction is bound to occur. Meera G., who’s been Potato’s Twitter ghostwriter since the beginning, however, says that’s hardly the case. This spud is practically the epitome of collaboration. “He shows an incredible amount of respect for the team because he’s such a big believer in Adam Smith’s division of labor, which is that basically you have a group of people specialize in different things rather than trying to be a jack of all trades. He’s good at being a potato. Because he’s a potato. But he’s not good at writing lyrics, because he’s also a potato. Not all of us can be as lyrically talented as the Meghan Trainors and Juicy Js of this world.”

For tour dates, exclusive behind the scenes access, and all things potato related be sure to stay tuned! 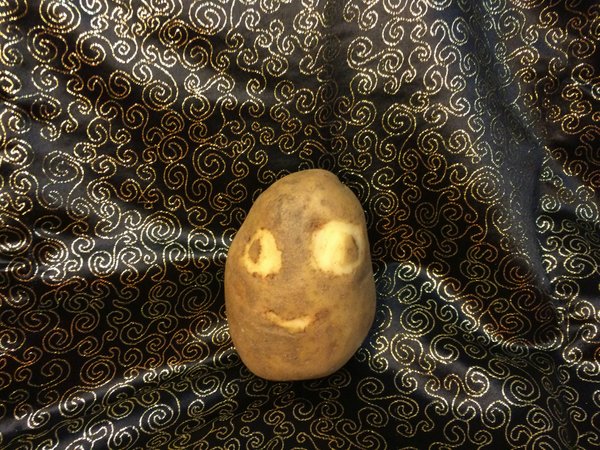